On August 28, 1957, United States Senator Strom Thurmond of South Carolina began a filibuster, or extended speech, intended to stop the passage of the Civil Rights Act of 1957. It began at 8:54 p.m. and lasted until 9:12 p.m. the following day, for a total length of 24 hours and 18 minutes. This made the filibuster the longest single-person filibuster in U.S. Senate history, a record that still stands today.

The Civil Rights Act of 1957 was designed to federally secure and protect the right of African Americans to vote.[1] In the Senate, the bill was supported by Republicans and Democrats, though most Democrats from southern states opposed the bill.  Thurmond personally saw the bill as an attack on fellow South Carolinian John C. Calhoun, who he admired.  Newspapers had reported that the bill would likely pass without a filibuster, as a vote to send the bill back to committee had failed 66-18 and there was no indication that the opposition intended to filibuster.

An agreement between the Southern senators to not stage an organized filibuster was reached in Richard Russell‘s office 4 days prior to Thurmond’s speech. Thurmond’s filibuster, largely a surprise, was intended to stop the bill from passing.  While Thurmond alone could not have sustained the filibuster long enough to prevent a vote on the bill, there was considerable uncertainty at the time as to whether or not other senators would join. Thurmond’s departure from the senators’ agreement was criticized by party leaders including Russell and Herman Talmadge. 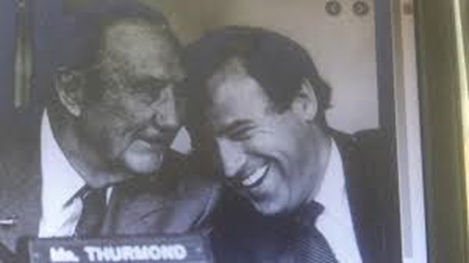 Born Freda Josephine McDonald in St. Louis, Missouri, Josephine Baker (1906–1975) was an African-American dancer and singer who was “the most successful music hall performer ever to take the stage” (Ebony magazine). Josephine Baker was larger than life: She was the toast of Paris in the 1920s with her trademark banana skirt, a star of stage and […]

The Untold Story of the Integration of Pro Football

(The Forgotten Four (clockwise from top left): Marion Motley, Bill Willis, Kenny Washington, Woody Strode) The story of how Jackie Robinson broke baseball’s color barrier in 1947 is the stuff of legend. But there’s another story about the desegregation of a professional sport that hardly gets told. A year before Robinson joined the Brooklyn Dodgers, […]

Untold Stories of Black Women in the Suffrage Movement