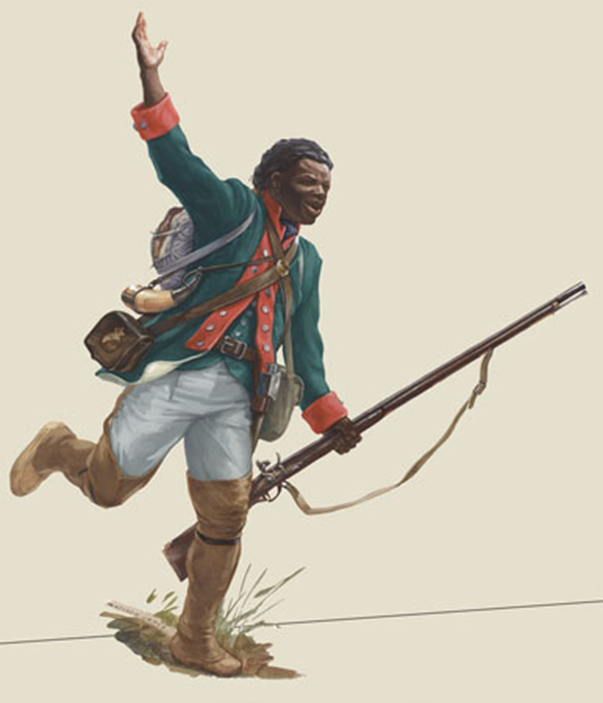 As a result of the looming crisis in 1775, the Royal Governor of Virginia, Lord Dunmore, issued a proclamation that promised freedom to servants and slaved people who were able to bear arms and join his Loyalist Ethiopian Regiment. Many of the slaves in the South joined the Loyalists with intentions of gaining freedom and escaping the South. About 800 did so; some helped rout the Virginia militia at the Battle of Kemp’s Landing and fought in the Battle of Great Bridge on the Elizabeth River, wearing the motto “Liberty to Slaves”, but this time they were defeated.

The remains of their regiment were then involved in the evacuation of Norfolk, after which they served in the Chesapeake area. Eventually the camp that they had set up there suffered an outbreak of smallpox and other diseases. This took a heavy toll, putting many of them out of action for some time. The survivors joined other British units and continued to serve throughout the war.

Black colonials were often the first to come forward to volunteer and a total of 12,000 African Americans served with the British from 1775 to 1783. This forced the rebels to also offer freedom to those who would serve in the Continental Army; however, such promises were often reneged upon by both sides.  Americans who gained their freedom by fighting for the British became known as Black Loyalists. The British honored the pledge of freedom in New York City through the efforts of General Guy Carleton, who recorded the names of African Americans who had supported the British in a document called the Book of Negroes, which granted freedom to slaves who had escaped and assisted the British.

About 4,000 Black Loyalists went to the British colonies of Nova Scotia and New Brunswick, where the British promised them land. They founded communities across the two provinces, many of which still exist today. Over 2,500 settled in Birchtown, Nova Scotia, instantly making it the largest free black community in North America. However, the inferior grants of land they were given and the prejudices of white Loyalists in nearby Shelburne who regularly harassed the settlement in events such as the Shelburne Riots in 1784, made life very difficult for the community.[30] In 1791 Britain’s Sierra Leone Company offered to transport dissatisfied black Loyalists to the British colony of Sierra Leone in West Africa, with the promise of better land and more equality. About 1,200 left Nova Scotia for Sierra Leone, where they named the capital Freetown.[30] After 1787 they became Sierra Leone’s ruling elite.[citation needed] About 400 to 1,000 free blacks who joined the British side in the Revolution went to London and joined the free black community of about 10,000 there.