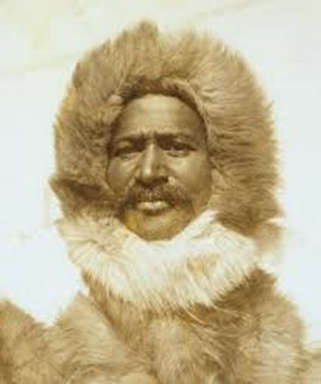 Matthew Alexander Henson (August 8, 1866 – March 9, 1955) was an American explorer who accompanied Robert Peary on seven voyages to the Arctic over a period of nearly 23 years. They spent a total of 18 years on expeditions together.[1] He is best known for his participation in the 1908-1909 expedition that claimed to have reached the geographic North Pole on April 6, 1909. Henson said he was the first of their party to reach the pole. Henson was born in Nanjemoy, Maryland, to sharecropper parents who were free people of color before the Civil War. He spent most of his early life in Washington, D.C., but left school at the age of twelve to work as a cabin boy. He later returned to Washington and worked as a salesclerk at a good department store. One of his customers was Robert Peary, who in 1887 hired him as a personal valet. At the time, Peary was working on the Nicaragua Canal. Their first Arctic expedition together was in 1891–92. Henson served as a navigator and craftsman, and was known as Peary’s “first man”. Like Peary, he studied Inuit survival techniques.